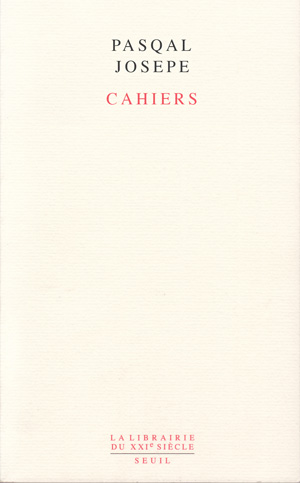 The notebooks of Pasqal Josepe, published in French at the beginning of April this year (Cahiers, Éditions du Seuil), have allowed prospective readers of this Spanish-Albanian author a first vision through the looking-glass of his fractured body of writing.

Although drafts of his work are estimated to stretch to some thirteen thousand pages, none of Josepe’s three novels or numerous short stories has been published to date. None was completed to his satisfaction. An obsessive perfectionist, he would rework a passage of prose over and over, changing it beyond recognition before finally abandoning it as unsalvageable. His novels and stories exist only as splintered arcs of these rejected prose fragments, loosely held together by theories and proposed connections outlined in these notebooks.

Josepe’s sole and compulsive subject was his own body. His writing constitutes a self-obsessed, overwhelmingly detailed examination of it: in space, in time, as memory, through the eyes of others, in imagination. The three novel arcs attempt – and fail – to synthesise these disparate facets into a single, living vision of his corporal existence. Instead, they show only how Josepe pulls his body apart.

The Cahiers end by reproducing one of Josepe’s later fragments in all its laborious iterations. The passage deals with the plucking of a hair from his eyebrow, eventually becoming an attempt to reinsert the hair into its follicle. This half-page fragment takes up, in total, the final fifty-five pages of the book. Forcing oneself to read and re-read this shard of his body an excruciating eighty-nine times, one cannot but be overwhelmed by the intense self-fascination with which Josepe scrutinised himself in the mirror of his writing – and by the equally powerful self-loathing which forced him to reject what he saw over and over again.

In a separate section, he writes (reviewer’s translation): “My writing is my body. I sculpt and shape it until what I see is perfect. And this means cutting away what is not perfect. It is a necessary mutilation.” Ultimately, the peculiar appeal of Josepe’s work lies in reading the constant and unresolved struggle between his self-perfection and his self-mutilation; a struggle which demands his work remain impossibly multiform and, therefore, unreadable. It is not clear whether Josepe himself understood that to reach a final, perfect version of his work would be to destroy it completely.

The writer’s long-standing partner Heco, who is not mentioned anywhere in the notebooks, took on the task of editing Josepe’s three unfinished novels after the latter’s death from AIDS two years ago. The first of the three, Pâris–Achille (‘Paris–Achilles’), is scheduled for publication at the end of this year. If it is readable as a novel, it will certainly be a bloodless mutilation of Josepe’s work and his body.